CodeX is a historical fantasy comic, developed in 2008 but published for the first time in 2016 after a couple of years of studying and revisions.

The plot is divided into different characters’ points of view, so intrigues and mysteries will be unveiled and narrated by the right character in the right moment, embellishing a complex story but never heavy.

The main protagonists, Arthimus and Mydrinn will undertake the hero’s journey, through redemption and personal growth, while facing phantoms from the past and carrying the burden that their ancestor’s left on them.

Historically the plot is set in a late imperial period, inspired by the crisis of the 3rd century, but CodeX is, first of all, a fantasy comic setted in an imaginary world where magic is real and mythological creatures walk amongst humans. CodeX absolutely doesn’t pretend to be a historical source, so facts and characters are fictitious and the only purpose of this comic is to entertain.

Updates: One page every Thursday 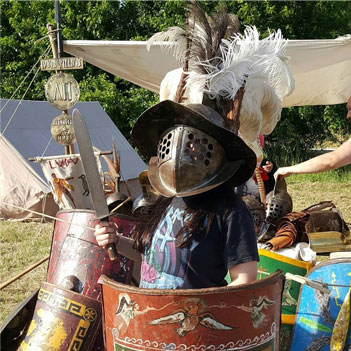 All-round author of “CodeX”, she is responsible of the writing, storyboarding, drawing, inking, toning, editing and lettering even if she hasn’t got the time for half of these things.

In fact, she’s actually a employed graphic designer for a company and the creation of this webcomic is just a personal challenge for her.

Born in the Apulie but always grown in Fanum Fortunae, she completed the Art School in Urvinum Metaurense, in the animation and comic-art section.

Despite the 3 years of specialization, the school never gave her the necessary notions for the creation of a graphic novel. Basically self-taught, she didn’t care about anything and anyone and started “CodeX” following a deep quarter-of-life-crisis.

RedTaiga reconsiders then the idea of writing her own webcomic, reworking and developing plot and characters of an old comic of hers from 2007. Always a fan of the fantasy genre in every form, she decides to set her ‘sword and sorcery’ story in a late Roman Empire. Legend has it that the choice was taken after a patriotic alcohol night.

I don’t have any at the moment, feel free to contact me via mail or social networks and I’ll be glad to answer you.